I can blame the wood: hemlock is a soft wood.  It crushes and chips instead of slicing nicely.  I've also been using poplar, which is much nicer to work, and alder, which is my favorite of all but I do not have much more scrap material to work with.

I can blame my tools: try as I might, I am not sure my chisels are entirely flat and sharp.  They look good, to me.  They have a nice mirror-polish on the backs (8000 grit waterstones) and using essentially the same techniques to sharpen them as I do for plane irons.  They act like razors when taken to paper or my armhair, and they pare nicely translucent very thin slices even on douglas fir.  Maybe I need to sharpen them even more finely?

I mostly blame myself.  Just not enough experience yet.  I've cut 16 sample joints, and will not feel terrible about it until I've hit 30 or 40... However, I have reached a plateau of sorts and am out of ideas.

One of the main issues is that I can never get them to seat all the way, as can be seen by the red circles here: 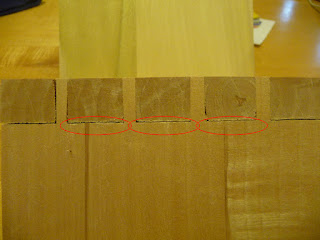 It would seem there is some obstruction in the socket.  However, on some of these joints I can actually see light all the way through, indicating that they are "pinched" into levitation by the side walls.  Its probably a combination of all kinds of sloppiness adding up.

My tails (cut first) usually look pretty good.  I can cut next to the line fairly well, and leave a rather smooth surface after cutting out the waste.  I do all that I can to get the bottom of the socket plumb and smooth, without crossing the baseline.  In the cases where I do cross the baseline, its understandable to have a gap, but I generally do not make this mistake (anymore) and am still baffled.

Marking seems to go ok, though it is never easy.  Cutting the end grain is not easy, despite using a proper knife.  Its impossible to tell if an effective cut was made until the whole process is complete (the cuts are not easily visible while the boards are in place).  Making multiple passes on each cut introduces error so I try to do it right the first time.  In general, they look good and seem to match the socket shapes.

Cutting to this line must be one of the biggest problems I have.  Again, it looks fine after cutting.  I am not obviously wandering from the line or skewing the saw.  And again, the chisel work seems to go ok, but the end fit tells a different tale.  I have been easing the backsides of the tails to make assembly easy (though it took me a while to actually wrap my head around which parts will not be visible).

My errors tend to be gaps, but at times I also have too tight of a fit, creating a split, such as outlined in red here: 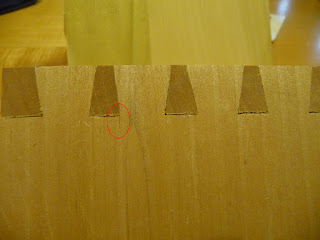 When test-fitting, I have a hard time identifying which part is causing the problems, and my solutions to pare a little here and there, as Thomas does, generally makes matters worse.

I am confident that more practice will help, and I am nowhere near giving up.  I am, however, temporarily out of ideas on what to consciously improve.  All there is to do is just keep adding more joints to the pile and keep at it.  I am actually only halfway through "dovetail month" and so was not expecting to be proficient yet.  It is just a frustrating plateau, after some leaps and bounds of improvement in understanding, if not execution, my last 3 joints have not improved significantly.

Here's a pile of some of them: 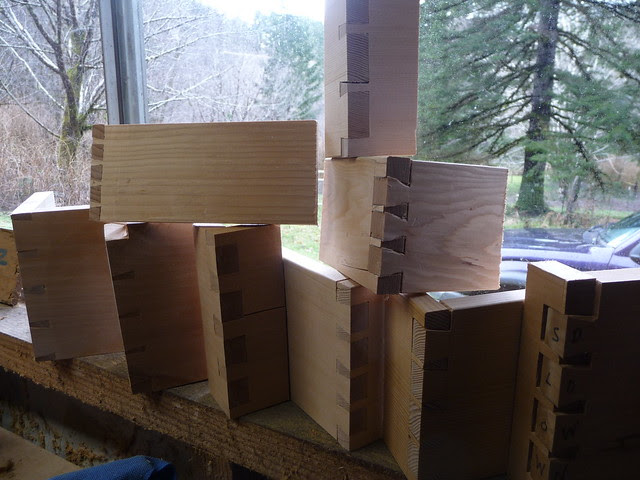 This post is not a solicitation for advice, although I would gladly accept it if my issues are indicative of something specific.  Its more just thinking out loud, logging my frustration, and an honest portrayal of the fact that woodworking is work.  Like a cooking show, none of it is as simple as it looks.  In fact, the more you know about it, the more you realize the difficulties.  I also realize that these skills must be learned by doing.  No amount of video-viewing and reading can transfer these skills beyond a shallow understanding.  And so I persevere...

In brighter news, check out these awesome mini-rules from Josh Clark.

I am especially fond of the tiny 3" one... it opens to 12" and has a very useful caliper.  I'll keep this one in my pocket for trips to the lumberyard for sure. 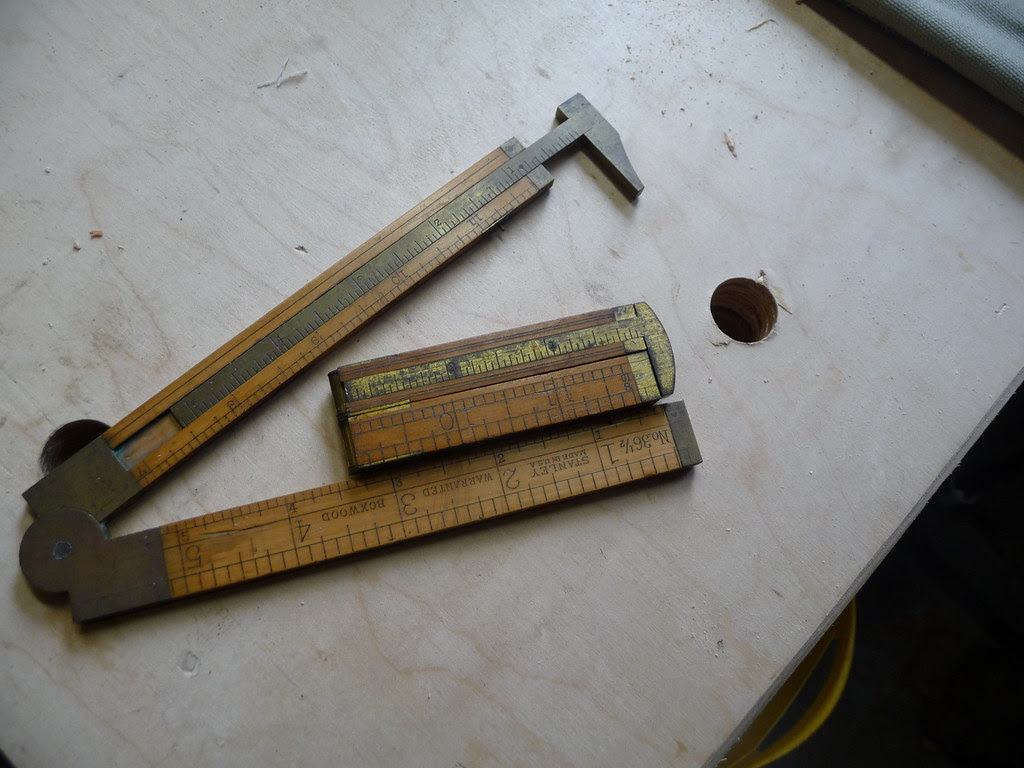