While assisting with courses at the school, I generally end up coaching students with their tool set up, technique, and use. This weekend, though, I have to admit that other than some grinder basics, I was there just to take care of loose ends. The topics covered in Making Northwest Style Adzes  were largely foreign to me. What a treat, though, to learn something utterly new and fascinating. In just a day, I was able to take a blank of 1099 steel, forge it into a flared shape on an anvil, shape hollows along and across the blade, grind proper bevels, and then the next day convert a tree branch into a handle and mount the blade. I now have a fully-functional carving adze. I suppose next I should learn to carve.

Here is the tool: 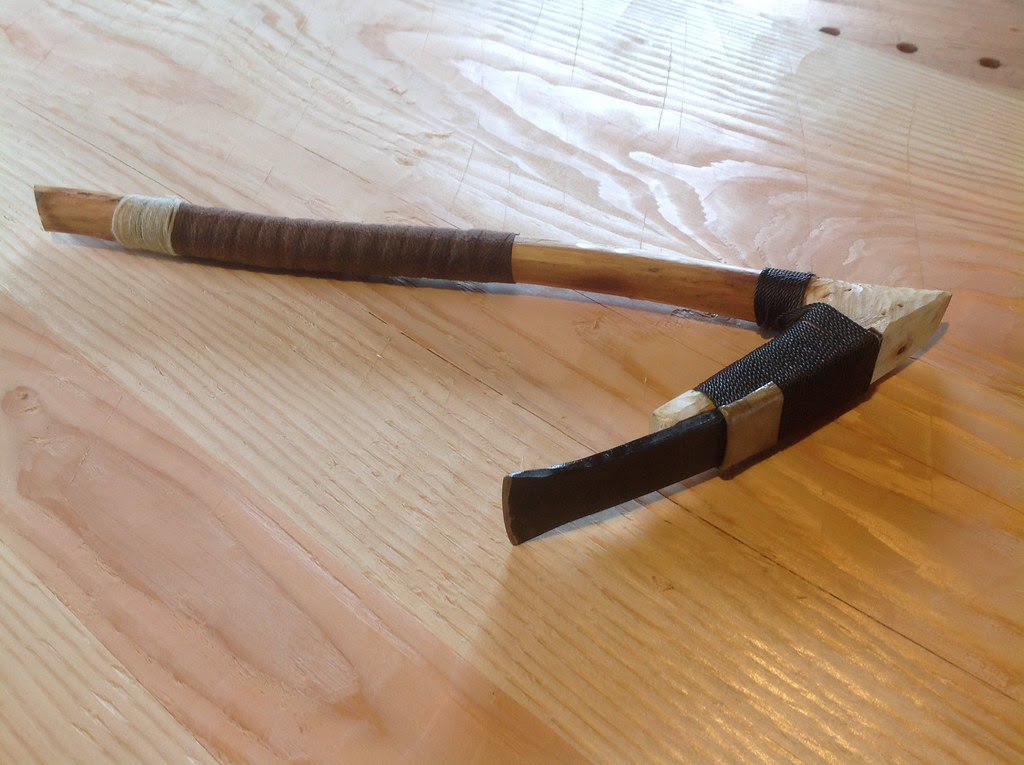 The blade is held onto the handle with skein-line, very strong line used to attach fishing nets to floats and that sort of thing. There is a rawhide pad covering part of the line, which was wet when applied so that it will shrink into form-fitting place. This pad protects the line from abrasion in use. I then wrapped the handle with old-school cloth handlebar tape (for bicycles), finished with twine, and then coated in oil and beeswax. I feel a layer of shellac on top of that will provide a little more grip so hope to do that.

The blade needs a final bit of honing on curved stones, and the outiside of it could use some polish to remove the scale from the heat treating and reduce friction. Some quick test chops show that this thing is pretty sharp as it is though!

It would be quite easy to walk away from woodworking and get into blacksmithing. I'll try to hold that urge at bay, for now, and slowly continue to build some metalworking skills as they apply to woodworking.

Steve Brown  is a gifted instructor and a living treasure. His knowledge of NW culture and artistry is vast, and he has the ability to translate and share this lore with ease. All of the students had a great time and were reluctant to leave. Skill levels ranked from utter novices to some master carvers. Three of the students were down from Alaska in order to build more adzes for their six-year project building a longhouse by hand at Glacier Bay!

This class is highly recommended, and it was a total pleasure to be a part of.
Posted by upriver at 10:21 AM No comments: