How to Make an Old Jointer Plane Act Newer

Its common knowledge that adding an improved iron and chipbreaker to an old Stanley plane will improve its performance.  In fact, a set from Ron Hock was among my very first premium handtool purchases.  However, the iron did not fit my plane, and I was afraid to tamper with it.  Until today.

There are no images because it is not a photogenic operation...  I just made a thin scribe with a square and put tape down to mark the mouth, clamped the plane in a vise (with wooden shims to pad the jaws), and went to work with a file.  I was nervous about opening it too far, so stopped, put the frog back into place and tested it 3 times before I had it open enough.  When it did fit, my mind was blown.  This jointer, an old #7, was already a joy to use.  Now its an amazing joy.  I can dial it almost as fine as a smoother, but the real magic is on the shooting board.  Before, I was getting an odd stripe on the end grain, although I could find no nick in the iron.  I was also getting slightly out-of-square ends, although this was remedied by flipping the board and taking a couple more cuts.  However, now the shooting is not only easier, but much more accurate.  Should have done this a long time ago!

One little benefit of this set-up is that now I can keep the frog snugged right up front, where it should be, so that the iron is supported at the very bottom by the plane body itself.  When the frog is retracted, there is a slight gap there.  It might only be a few millimeters, but every bit helps in the war on chatter.

I use a Hock iron and chipbreaker in my jack plane (a #5) and it is fantastic as well.  In that case, I had them grind a 10 degree camber on it for me since I was a little nervous about making such a drastic modification to the stock iron.  I would now not hesitate to do this myself, but if you are new to hand planes and are planning to buy an iron from Ron, it might be worth it to inquire about this service.

The desire for a Lie-Nielsen #7 is fading, as is the desire for a #51 Shooting Plane.  Wait, who am I kidding? I still want a #51.  While my jointer now shoots nicely, it is still murder on the hands to do for very long.  There is just not a comfortable spot to hold it which is also effective. Not sure its an issue worth $500 to fix, but I do dream of such things.
Posted by upriver at 8:44 PM 4 comments:

This is a mild departure from the normal topics here, but it is related so bear with me.

I've long been a fan of Lloyd Khan. From his early work with the Whole Earth team, to his Shelter books, and more recently, his books focusing on hand made houses and those in the Pacific Northwest, I have eagerly read and enjoyed everything he has put out - even his book about septic systems.  So it is no surprise that I recently jumped on the chance to preorder his latest masterpiece, Tiny Homes: Simple Shelter.


The book is all you would expect from a Lloyd publication.  While the subject matter is tiny homes (he defines them as 500 sq ft or less), the book is not tiny.  However, he did include one that is!

Many pages of the original were reproduced in this matchbook-sized pocket version.  A gimmick to be sure, but it is a great one! 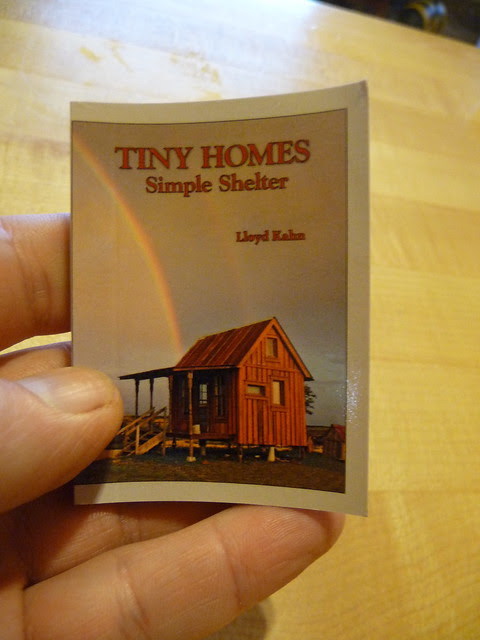 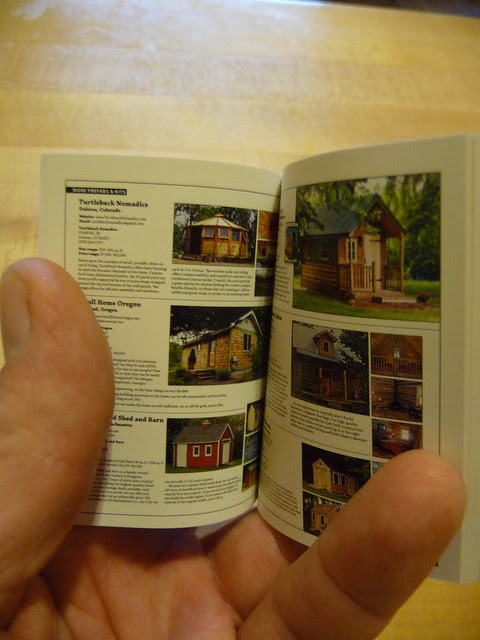 The book is fascinating, detailing not only homes but shops and studios as well.  Without any heavy-handed philosophy, it makes it clear that minimalism has merit and simplicity and beauty can and should be lifelong partners.  Lloyd admits that he himself does not currently live in a "tiny house" but he has spent his fair share of time bulding them and living in them, and he details some of his portable surfing rigs for travels in Baja.

Most of these structures have handmade components since this type of structure just isn't compatible with modern building materials and methods (for the most part... there are some prefab exceptions).  You'll therefore find inside gorgeous carvings, custom moldings, and homes built off-grid with hand tools, often from local natural materials.  Incredibly inspiring stuff for anyone with any interest in wood or building.

While not a how-to book, this book is an excellent addition to the hand tool enthusiast's library.

If this is too far off-topic for you, here is another dovetail joint.  They are getting better, but this one still has two flaws: baseline was crossed with the saw, and I accidentally rounded the corners of the tails while "easing" them into place.  Still, a structurally excellent joint that is rock-solid without glue.  A wholly acceptable joint is in sight! 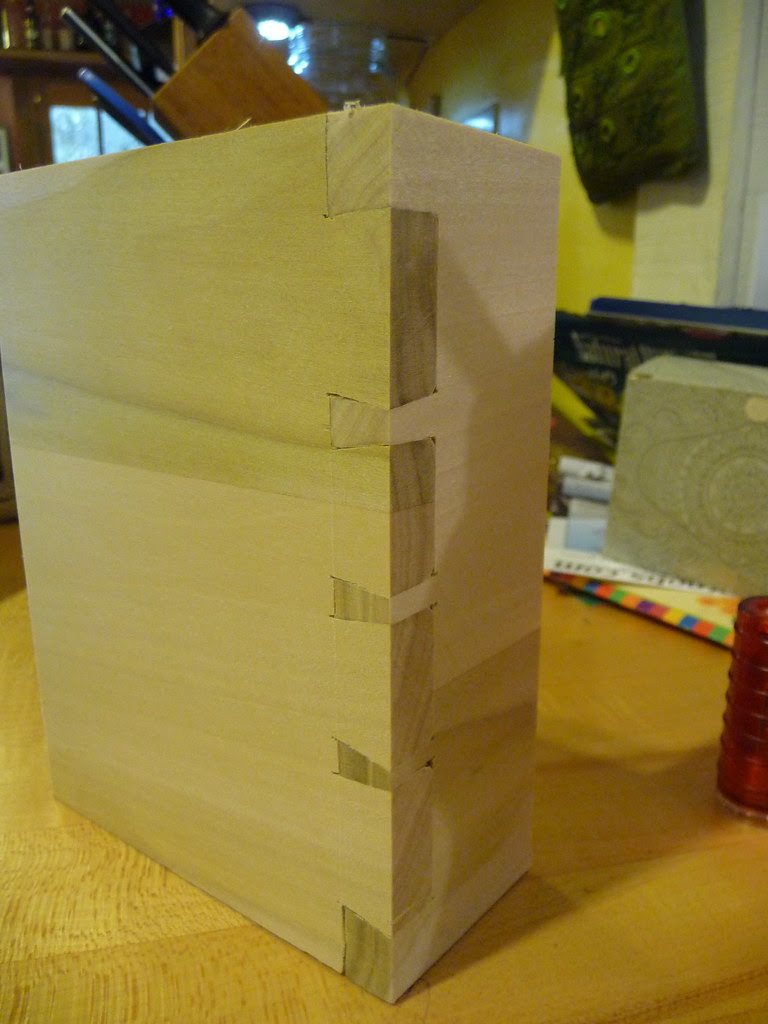 In The Joiner and Cabinet Maker, Thomas is about 14 years old in rural England.  Today I discovered a slightly older apprentice right here in Oregon:

"My name is Kelton Goold and im a junior in highschool in Pendleton Oregon. One of my greatest passions is woodworking and using hand tools. Ive been woodworking for about a year and have mostly built projects for my shop, but also some cabinet work. Over this summer I built my first bench using the roubo style design, needing more counter space I also built a nicholson style bench"

Check out Kelton's work at his blog.  I wish I would have started out on my own journey at his age...

http://gooldworkshop.blogspot.com
Posted by upriver at 10:57 AM 3 comments:

Another Dovetail, Another Saw

There have not been many updates because all I have been doing is practicing dovetails.  I have placed an order for a gallon of glue, yes a gallon.  This is to build the new workbench.  That will start fairly soon, weather permitting.

In the meantime, I am still cutting a dovetail joint every time I have a chance.  I have lost track of how many there are so far, but probably around 10.  They are getting better in some ways but not always.  I am inventing new ways to make mistakes all the time, and I foolishly decided to try a different technique: cutting pins first instead of tails first.  I would like to work either way, but really should master tails first before switching.  The seemingly trivial change actually creates a wholly different workflow and set of methods required.  Thomas does it pins first, but Rob Cosman has produced the clearest videos, so I have been using his methods.  Eventually, I will try to synch of with Thomas, but I am still struggling with the basics such as cutting exactly to the line, proper chisel technique, and so on.

The most recent joint is probably the best yet, but still flawed.  I split the board on one tail, meaning it was too tight.  Yet there are gaps on some of the other tails. It seems as though I bumped the board while transferring the marks; the shapes of the cuts were correct, but the placement on some of them was off by a millimeter or two.  Transferring the marks continues to be my biggest problem.  I feel like I am cutting and chiseling to my marks ok, but the marks are not always in the right place.  I expect this will continue to improve.

Here's the result of the last one (you can see the split near the top): 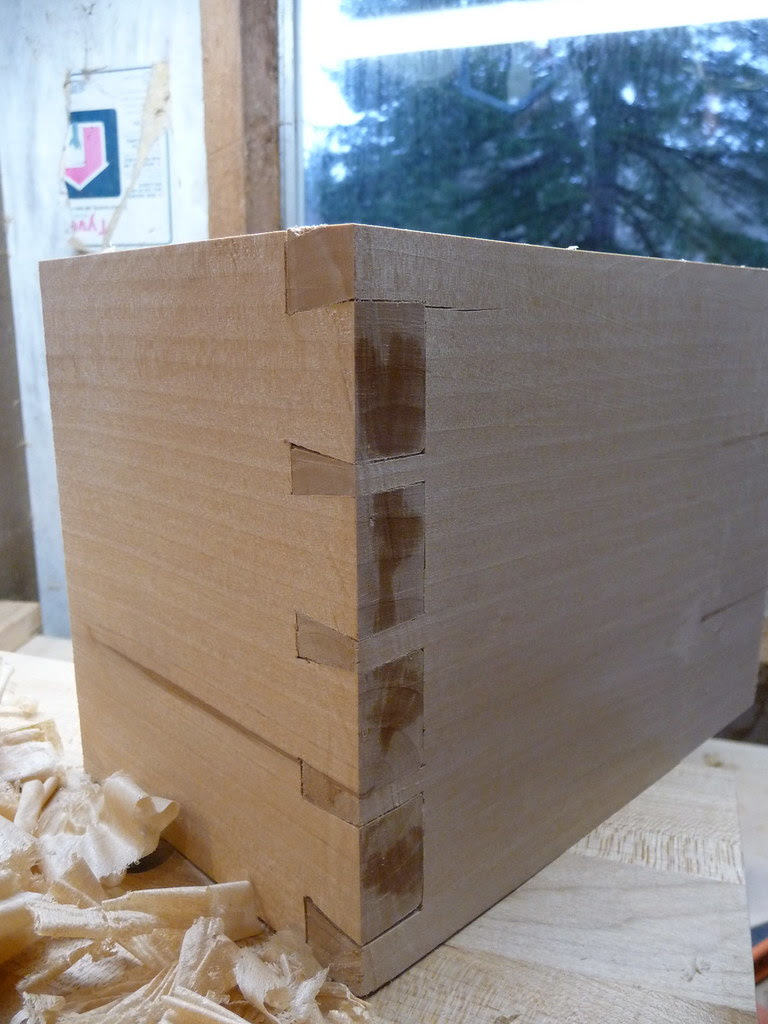 Other than the split, this one is possibly "good enough" but not nearly perfect enough for me to continue with the schoolboxes.  Its possible that the 31 sugggested for "dovetail month" will suffice, but I might be slow.  Anyway, I won't give up, but I won't post every single one here, either, so the blog will be slow.  I will post some "worst of" soon, detailing the mistakes I have made and what I have done to improve them and the lessons learned.  I believe so far that no matter how much one reads and understands this process, its really a matter of hands-on practice.

In other news, I did obtain a new saw, completing my core collection.  This is a fine crosscut panel saw, created by Matt C who runs thesawblog.com and a great saw rehabilitation service.


Similar to a Lie-Nielson panel saw in size, its 10 points and cuts very nicely!  Its razor sharp - and I would encourage anyone needing work done on saws to give Matt's service a try.  His tote is as comfortable as can be and the saw cuts as nicely as any I have seen.  Look at the beautiful "lamb's tongue" detail, where the lower swoop of the handle connects to the part contacting the saw itself.  Thanks for sharing it with me, Matt!


It's shown here underneath a Wenzloff panel saw based on the Harvey Peace design.  Its pleasantly small, light, and wonderfully ergonomic.  I am really happy with this saw. 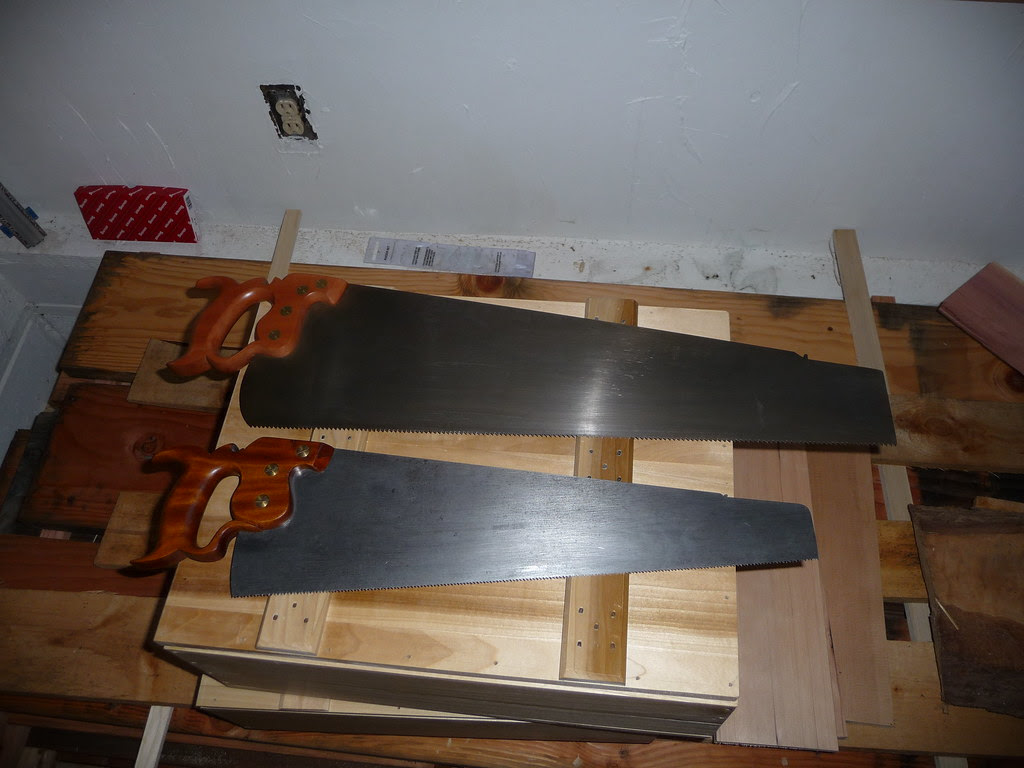 As always, thanks for following along and stay tuned for some more project-based updates (including the workbench build) coming soon!