I have good news and bad news.  The good news first:  The Lie-Nielsen Hand Tool Event was a ton of fun.  Bad news towards the end of this entry.

Not sure if I won a door prize yet, but here is a spoiler: I am not really the kind of dude who ever wins things.  Not amazing things like a LN tool, anyway.

This event was well worth the 3-hour drive for me.  If you are already deeply connected to a local network of hand tool users, maybe it would not be as great but for me it was a blast to be surrounded by serious hand tool nerds for a little while.  It was of course also wonderful to handle the hundreds of tools on display and freely ask questions, view demonstrations, and generally revel in the company of fine folks and hand tools for a couple hours.

It was graciously hosted by the Northwest Woodworking Studio , a place I had been to once before to take a class on hand tool use.  I had mixed feelings about the class, but communication with director Gary Rogowski left me feeling better about it and so it was especially good to meet him today and even get a personal dovetailing lesson.  He gave me some very good ideas which I am quite keen to try out as soon as possible. 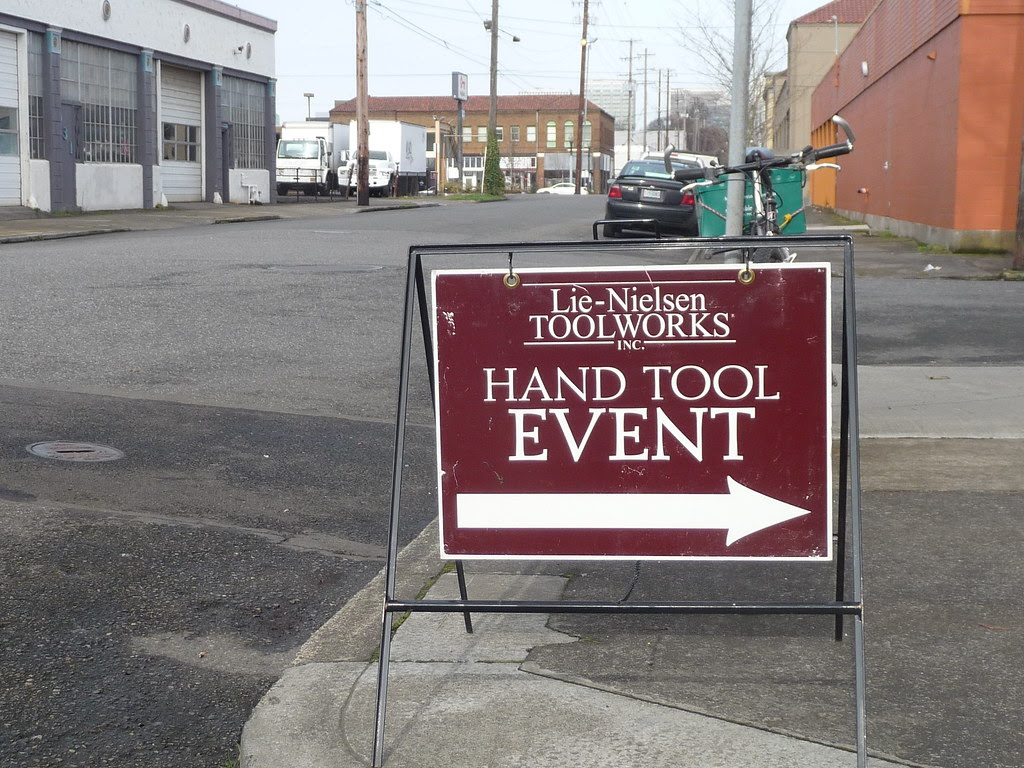 The school is housed in an unassuming industrial area of Portland, but its very unique in that by industrial I do not mean giant multi-acre refineries and warehouses... this is an area studded with tiny workshops, glass supply stores, coffee shops, cabinet makers, eco-building suppliers, bicycle shops, and so on.  I love Portland.  Anyway, you would barely know anything was happening other than by this sign.  An almost unmarked door, closed tightly and almost locked-looking, held this for those who opened it: 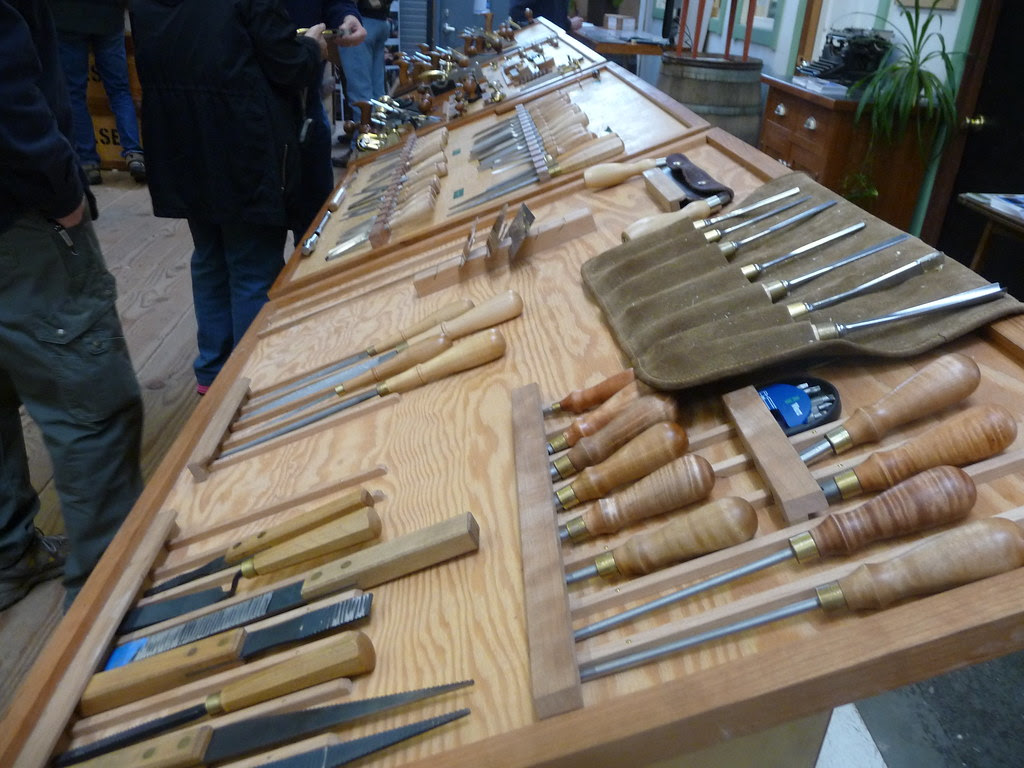 I wish I had taken better, and more, photos but I was frankly too busy lifting and inspecting almost every one of these tools.  It was especially nice to be able to compare their sharpening to my own.  These were all supremely sharp and truly ready to use; it gave me a little insight as to what to seek when setting up the tools I use each day.  I was able to work with identical copies of what I normally do, only without any doubt as to my own set-up and honing abilities.  This alone was worth the price of admission.  Well, quite a bit more, since this was free. 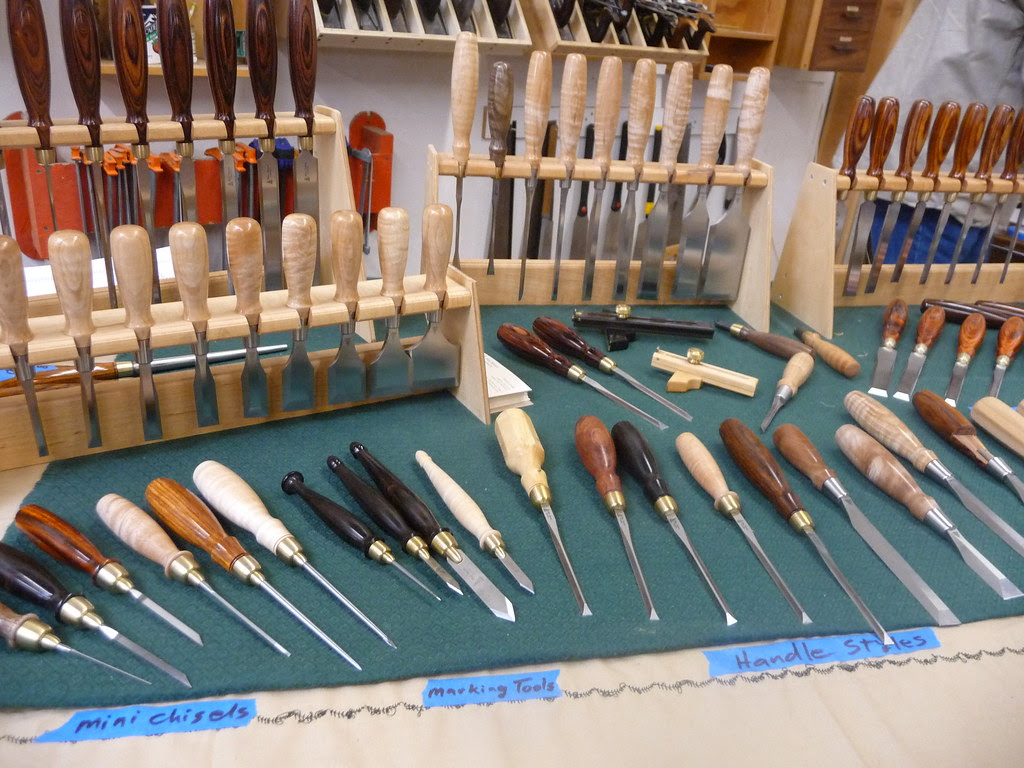 Lie-Nielsen tools are wonderful, and I love every single one that I have put into use so far.  It needs to be said, though, that Blue Spruce Tools are in a different league when it comes to appearance and feel.  David Jeske, who happens to be an amiable fellow (as almost all hand tool makers somehow seem to be), creates these works of art in his home.  They feel almost liquid in the hand, but still as firm as the figured maple and other jewel-like hardwoods the handles are made of.  He has a mesmerizing display of sizes and styles available.  Its difficult to explain how cool some of the impossibly small inlay chisels were, not to mention the elegant paring chisels, the marking gauges which made me want them even though I have plenty of marking tools already, and and and and and.  Really good stuff.  Expensive but I can't say overpriced.  He had a paring chisel with a grinding scuff on the top - no problem to function at all.  It was marked way down.  I wanted it badly.  Very badly.  I left it there for someone else, more because I am broke than through any act of willpower or compartmentalization of material wants. 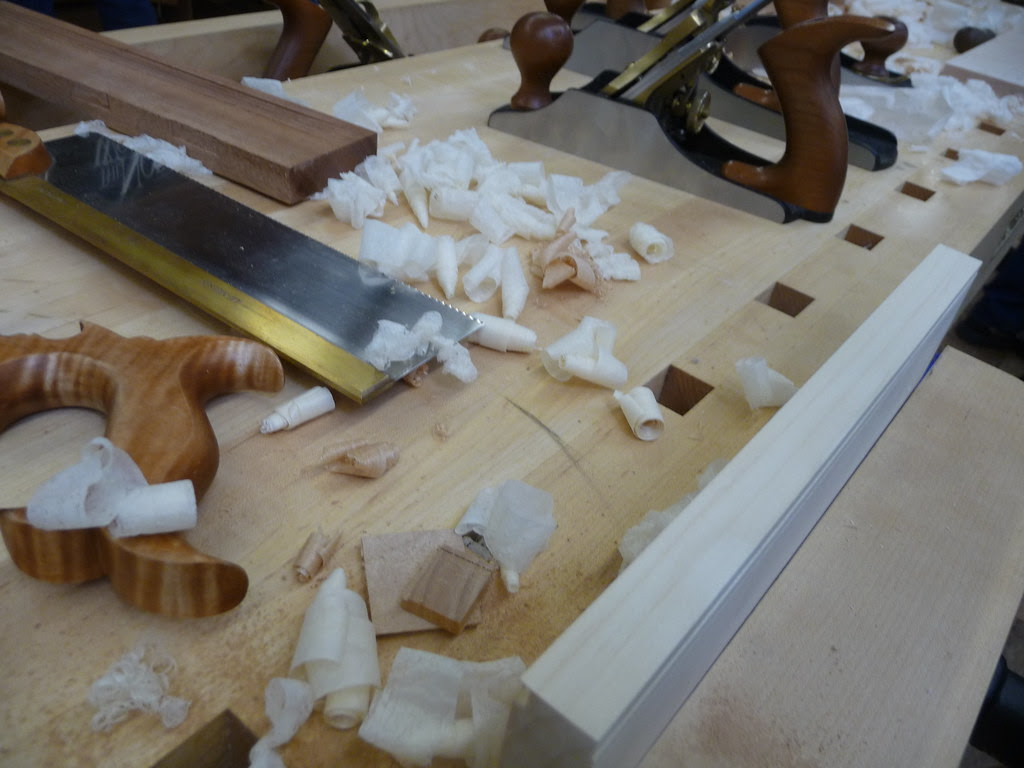 These images are really not good but they do show what it was like.  I actually used every single saw Lie-Nielsen had there, which I believe is all of them they offer.  You know that feeling of looking at an incredibly alluring website or catalog where you just want every single thing, and you wonder what they are like?  You dream of being able to use them all.  That is what I did today.  It was free. 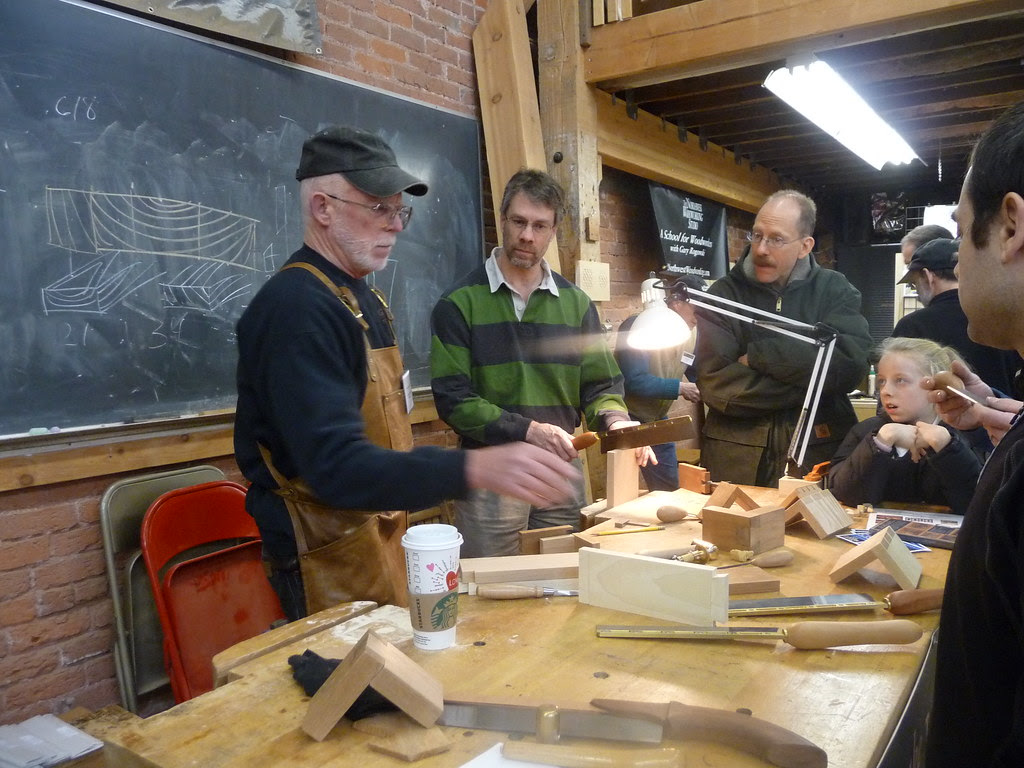 There were tons and tons of impromptu demos.  These guys have such wonderful careers...  Not only making tools, but showing them off to completely appreciative nerds.  This photo shows Mr. Glen-Drake talking about saw sharpening.  Someone asked him how long it takes to sharpen a saw, and without missing a beat, he pulled out a large wooden model of saw-tooth configurations, a shop-made saw vise, and sharpened a saw.  He gave great advise to people about sawing ergonomics, and he filed the teeth off one of his saws to show what dull looked (and sounded) like.  Then he sharpened it again and let them feel the difference by using it.  He also wore a really bad-ass leather apron.  Woodbutcher is a term he has earned in the most awesome of ways. And finally, the bad news.  Fans of Lie-Nielsen already know what the above is... but for the un-initiated, its a #51.  This is a plane that does one thing only and does it as well as the laws of physics allow: it rides on a shooting board with authority and trims and trues the edge of a board, especially end grain.  Its really, really expensive.  The bad news:  it is so nice.  It works.  Its for real.  It is better than they say.  It works almost effortlessly. I tried it on walnut, curly maple, and oak.  It just goes "snisssssk" and ejects a shaving.  It feels so good in the hand, completely free of the borderline agony my work with a jointer on its side causes.  As a 90% cheaper option, they did have a "hot dog" clip-on pad which might work on a Stanley (I was advised to take micrometer measurements and call them into the company) and it felt really nice.  But this thing was so nice that I have to say it:  It is actually worth the $500 if you have it.  I don't.  But I will always want this thing.