Not me... but this cute little secretary desk I was asked to repair. I have had something like this on the builditsomeday list for a while, so a chance to inspect it was welcome. 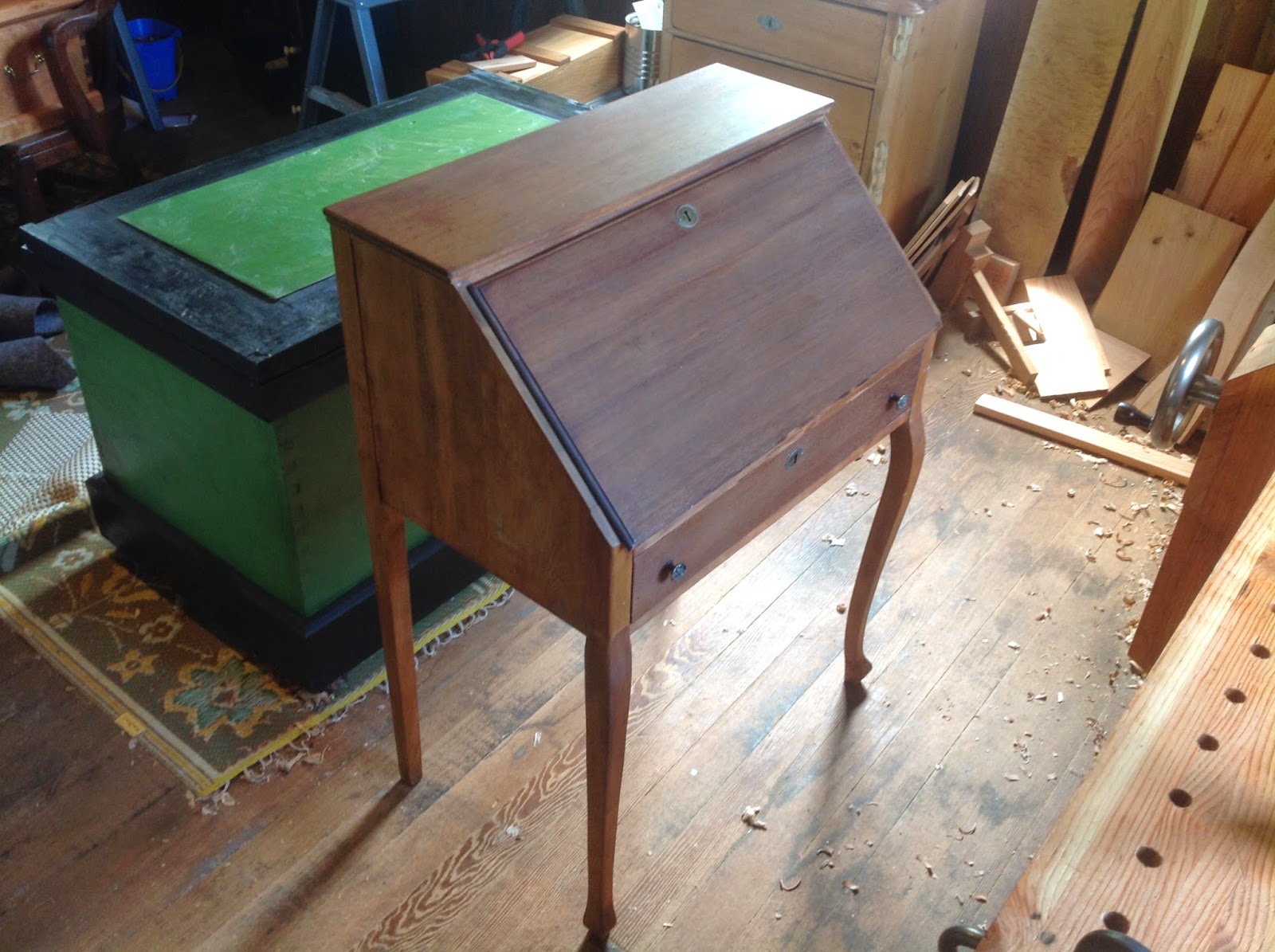 This unit's main issue, functionally, is that one of the support hinges is missing, and the other was horribly mangled. There do not seem to be any direct replacements on the market, so I will probably order something slightly different.

Cosmetically, the thing needed some TLC. At some point, it had been stripped and re-stained, and then later someone had tried the same thing again, but gave up after only sanding the easy parts. This makes lots of mismatched coloring.

I was able to remove the top cluster of shelves (this is called the "gallery" if I am not mistaken) by removing the back of the unit. However, the back itself was trashed so I will replace it with new material. I was told by the owner that plywood was fine, but I just take that as a challenge.


The original back was plywood of sorts. It was several boards of 1/8th white wood covered with veneer on both sides. The back was painted black on top of that. The boards had warped in alternating directions, creating huge bulges in the veneer and popping over the nails in some locations. I think I will use shiplapped cedar to replace the back, but first things first...

I cleaned the whole unit with denatured alcohol just to get a better look at it and sense of what it looks like wet. I then did some exploratory sanding to see what was under the various layers of finish. Next was an overall sanding of the inside of the gallery, the most important part. The exterior of the piece looks like it just needs some fresh oil and wax, not a complete refinishing. I sanded the interior of the gallery as much as I could within scope of the project... that is, I was not going to take it apart or rebuild it. The task was to paint it if need be, but not to put "too much" work into it. I'm optimistic that perhaps with some dark shellac, it can remain "wooden" looking while evening out the color variations.


Step one has been to simply apply a layer of tung oil on top of whatever is there. It looks pretty good, at least while wet:

While taking out the main drawer to oil it's face, it became apparent that the bottom of that was in the same bad condition as the back of the unit. It was also made of the same type of veneer sandwich.

I had some sortof-thin Doug fir sitting around which seemed like a good candidate to make the drawer better-than-new. These are boards cut from my property in Oregon, and have been drying for a very long time. While I usually hate to plane down a board excessively, these boards which were essentially scraps, went from 1/2" to 1/4" thick via the magic of my favorite cheat: the thickness planer. 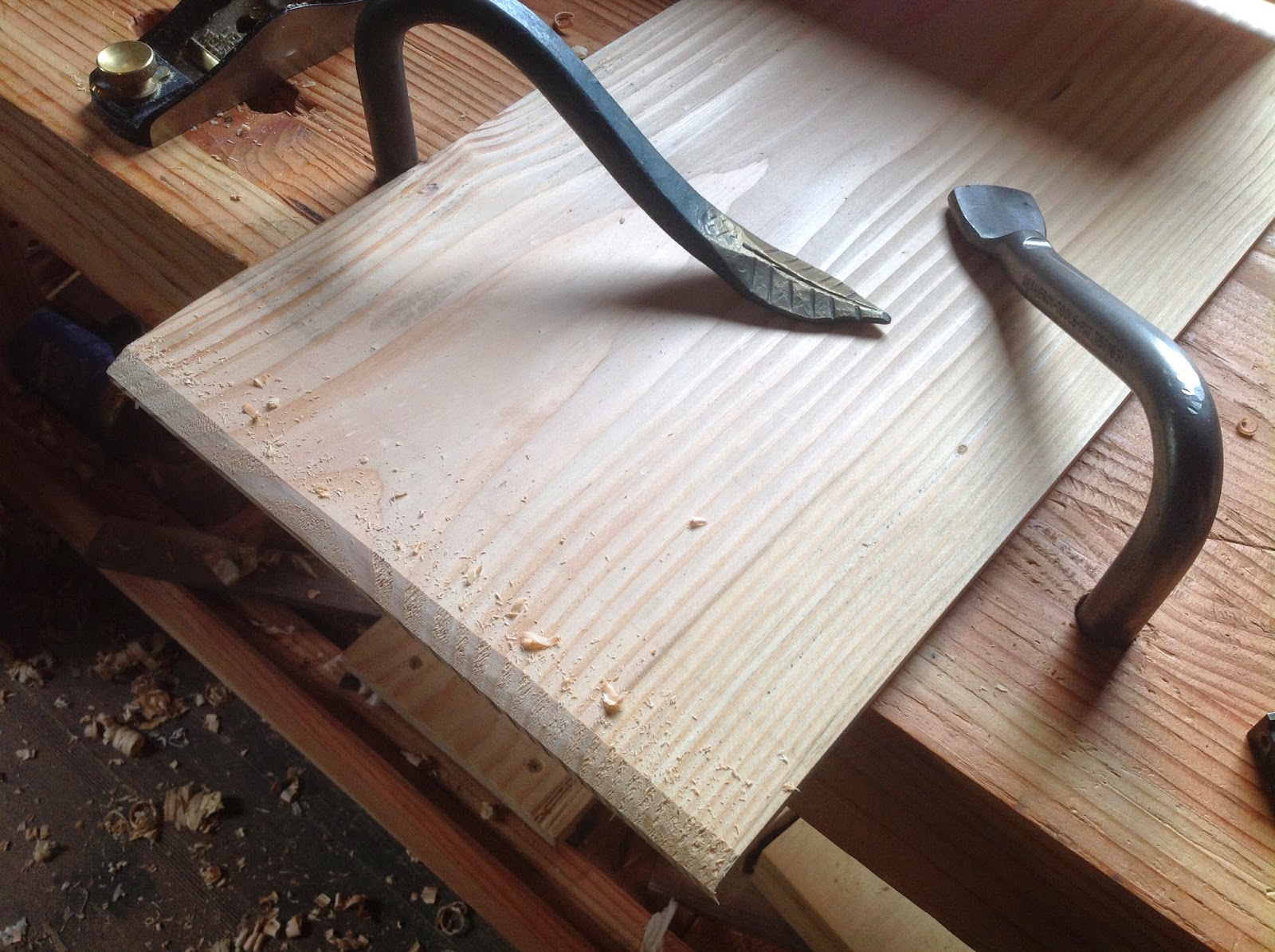 Rather than messing with carefully laid-our rabbits, I simply fielded the bottom panels with a bevel using a jack plane. It was very fast work. Nobody looks at the bottom of drawers anyway, and if they did, they would go "wow, someone did this by hand with a plane! Nice!" 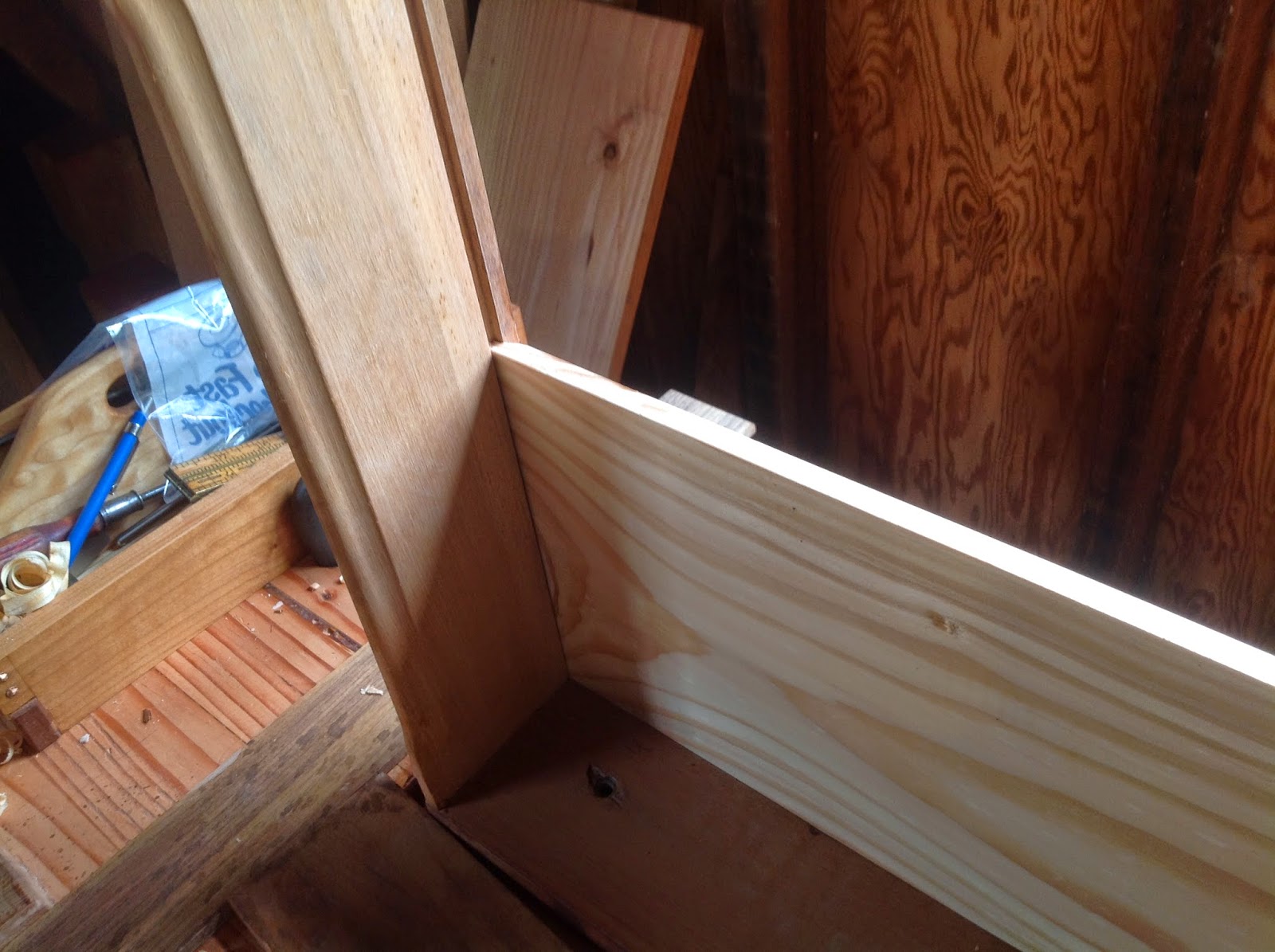 As I knocked the drawer apart, which was thankfully easy, I did notice that originally it was glued. Failure over time? Had someone already busted it apart and put it back together without fresh glue? I doubt it. I assume that the glue just didn't hold up all that well. 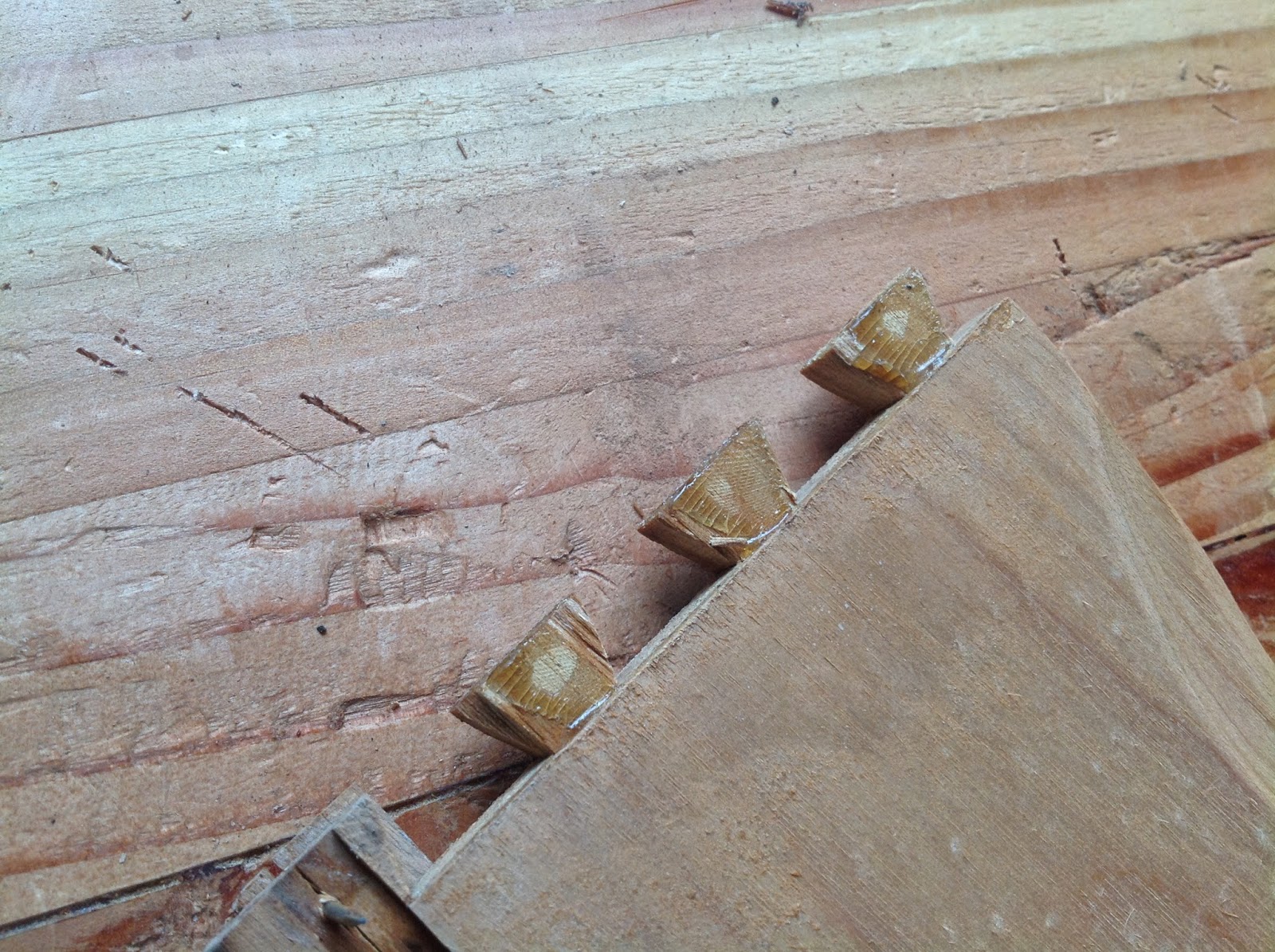 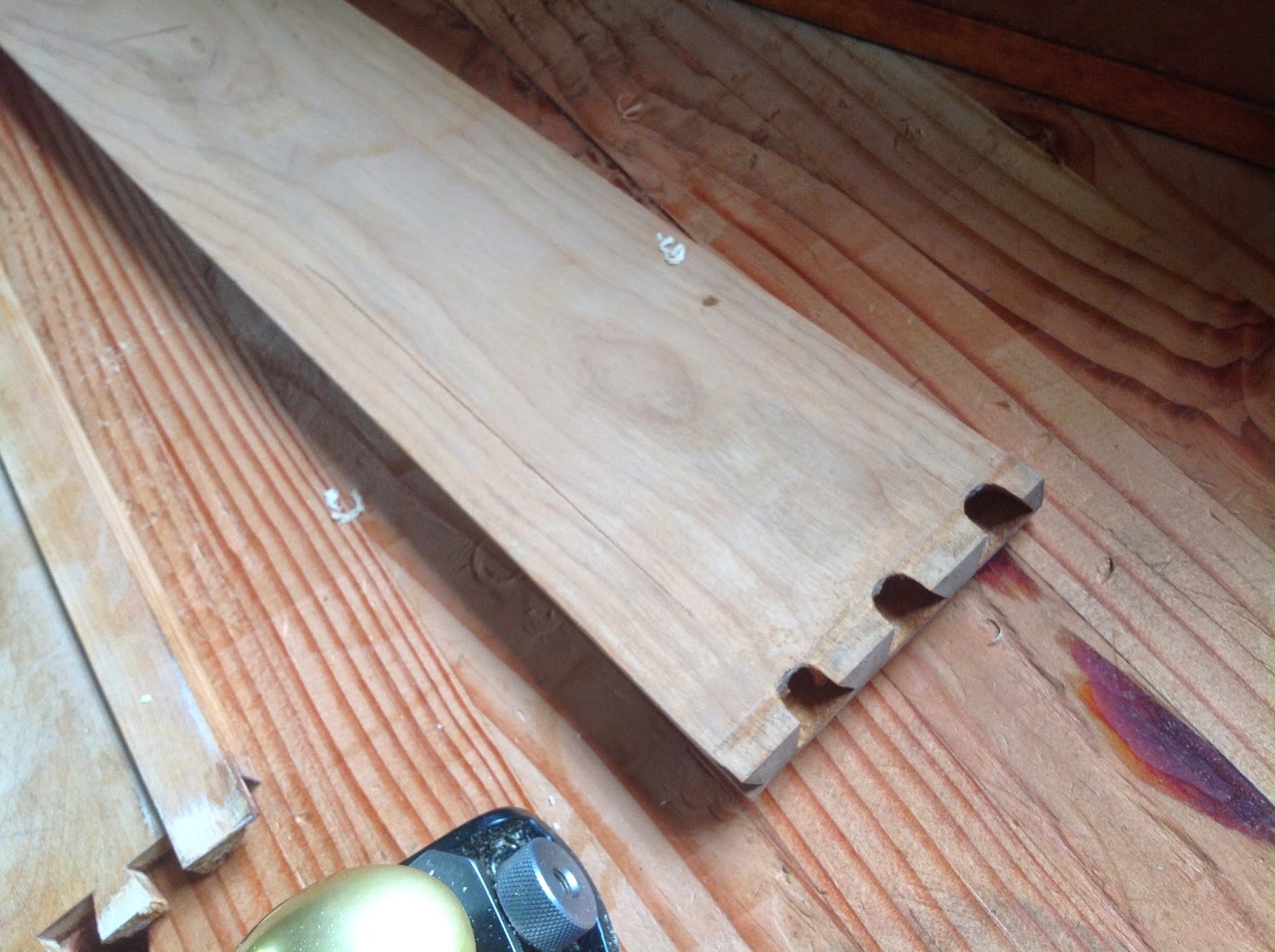 I also noticed that these dovetails were, at least initially, machined. The round sockets indicate drilling. Planer marks were visible on some of the panels as well. This may not be a relic right out of Roubo's shop, but still a piece handsome enough to give some new life to. 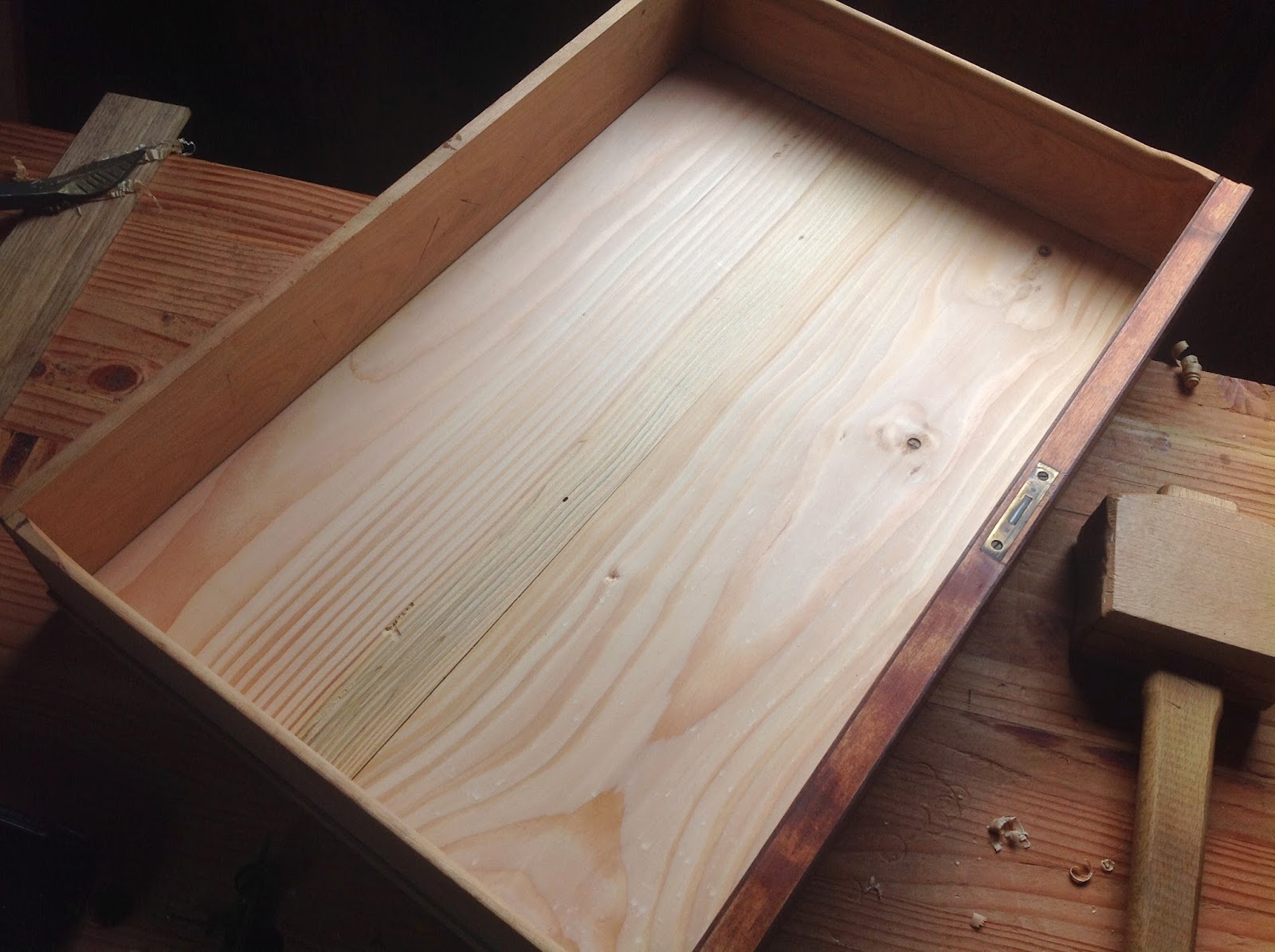 And a new lease on life for this drawer. The new bottom should last another century or two. There is a little room in the back of the drawer for the boards to expand, so I glued it in the front but the back is floating. I also tacked in the back with a tiny brad, thinking that it will hold it firmly, but move as a spring if need be during expansion. I'll let you know in 45 years how that went.

Next up will be to re-assess the main unit once the tung oil dries, and then perhaps play some games with tinted wax and shellac to try to even it all out. Oh yeah, and making a new back. Stay tuned.
Posted by upriver at 5:22 PM